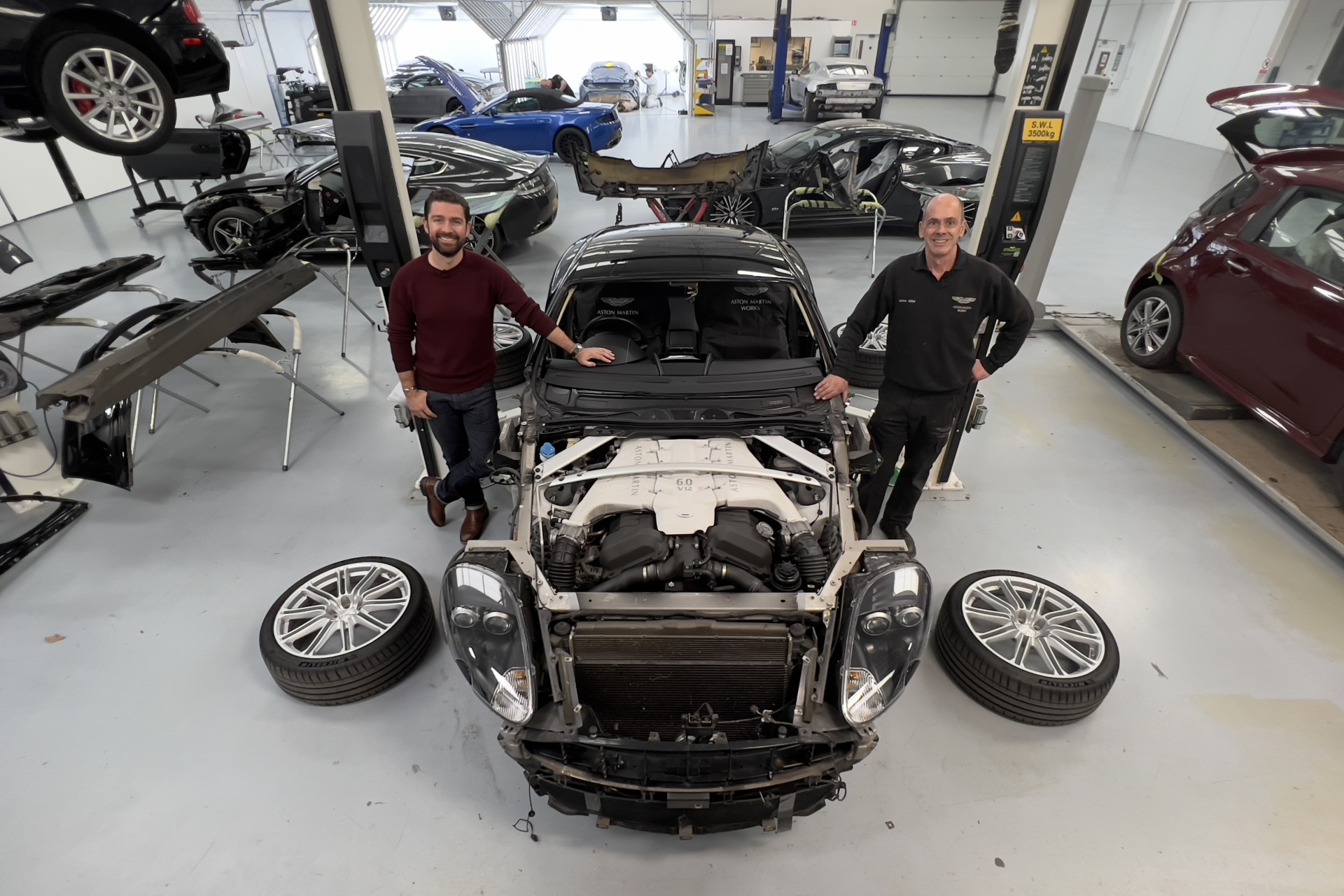 Welcome back to Aston Martin Works! Today, we are spending the day with Joe and Steve who are taking us through a process that I didn’t know Aston Martin do, which is effectively a shakedown and inspection of the car in advance of us ultimately taking it apart.

Joe has been working with Aston Martin since for 17 years – joining them straight out of school at 16 years old, as an apprentice. The first car he worked on was a Lagonda! He worked on the continuation projects like DB4, GT, Zagato and DB5 Goldfinger. The majority of his work was preparing the cars for track days and nights – fitting them out with track cameras and telemetry. 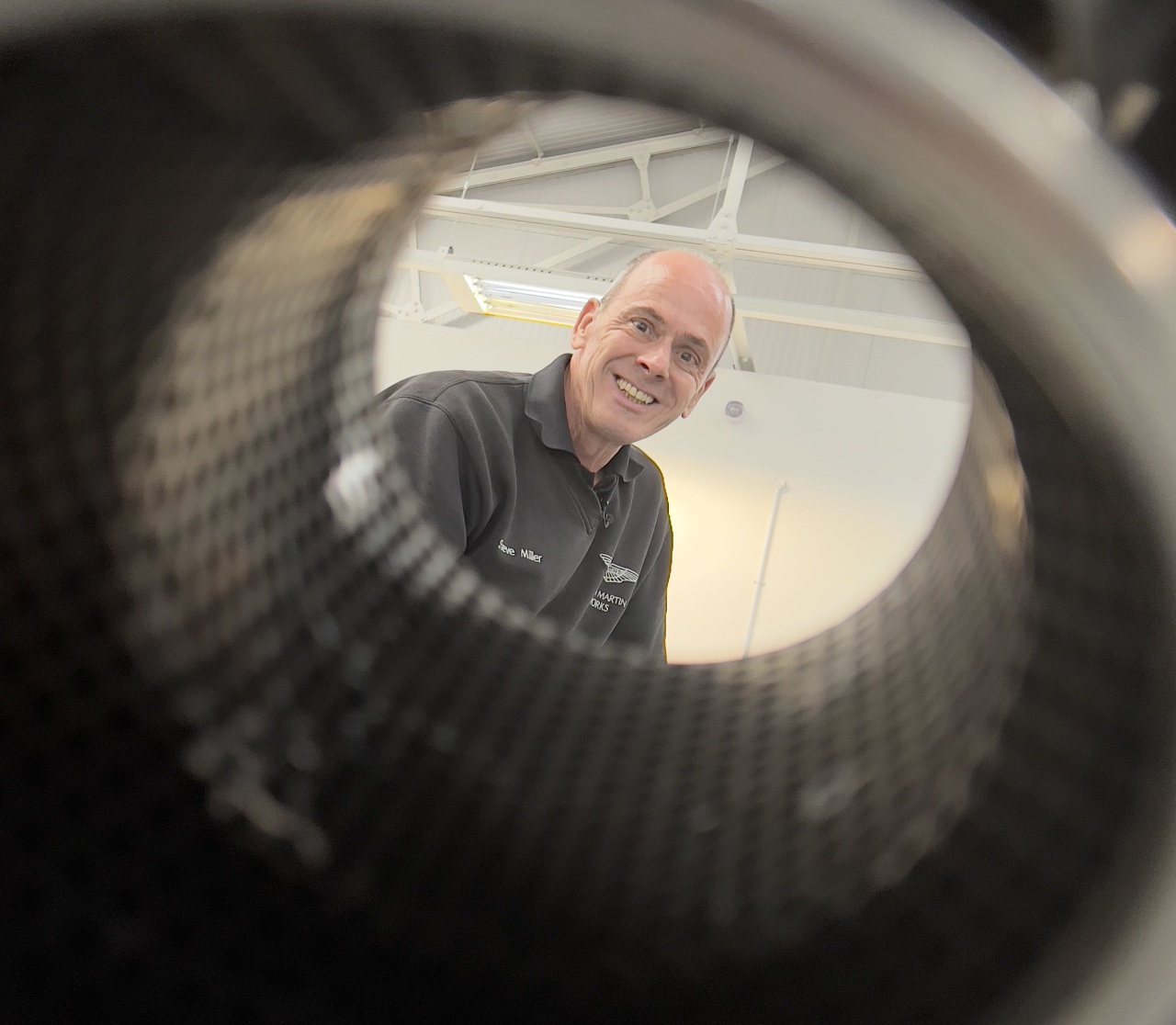 The first issue Joe found is the mesh on the rear bumper is missing, but when the bumper is off to be repainted, it can be re-bonded back on. My Aston Martin DBS looks used, it is not a show room car – I think the previous owner loved a car wash because it looks like it has been attacked by a Brillo pad!

There is a little bit of condensation on the window in the morning, which Joe tells me indicates that there is a small leak around the beading of the windshield.

The heat shield on the exhaust is also missing a fixing on the back. There is a small mark on the damper, meaning that on full lock the brake flexi will fold down and touch the damper.

Joe and I take the car out on the road, where we do a full function check and cruise control. As we are driving, we notice water coming in through the front windshield! When it rains heavily, I can literally hear water sloshing around under the dash.

This Aston Martin DBS is just approaching 31,000 miles, and Joe tells me that cars with this mileage are nicely run in and supple – it really shows on the bends!

After our drive, we return to Aston Martin Works to meet Steve, who has been with Aston Martin for 36 years. He started in the Aston Martin Factory – the first car he ever worked on was the V8, before moving onto the Vanquish. Steve has seen everything, and he is about to take the car apart! 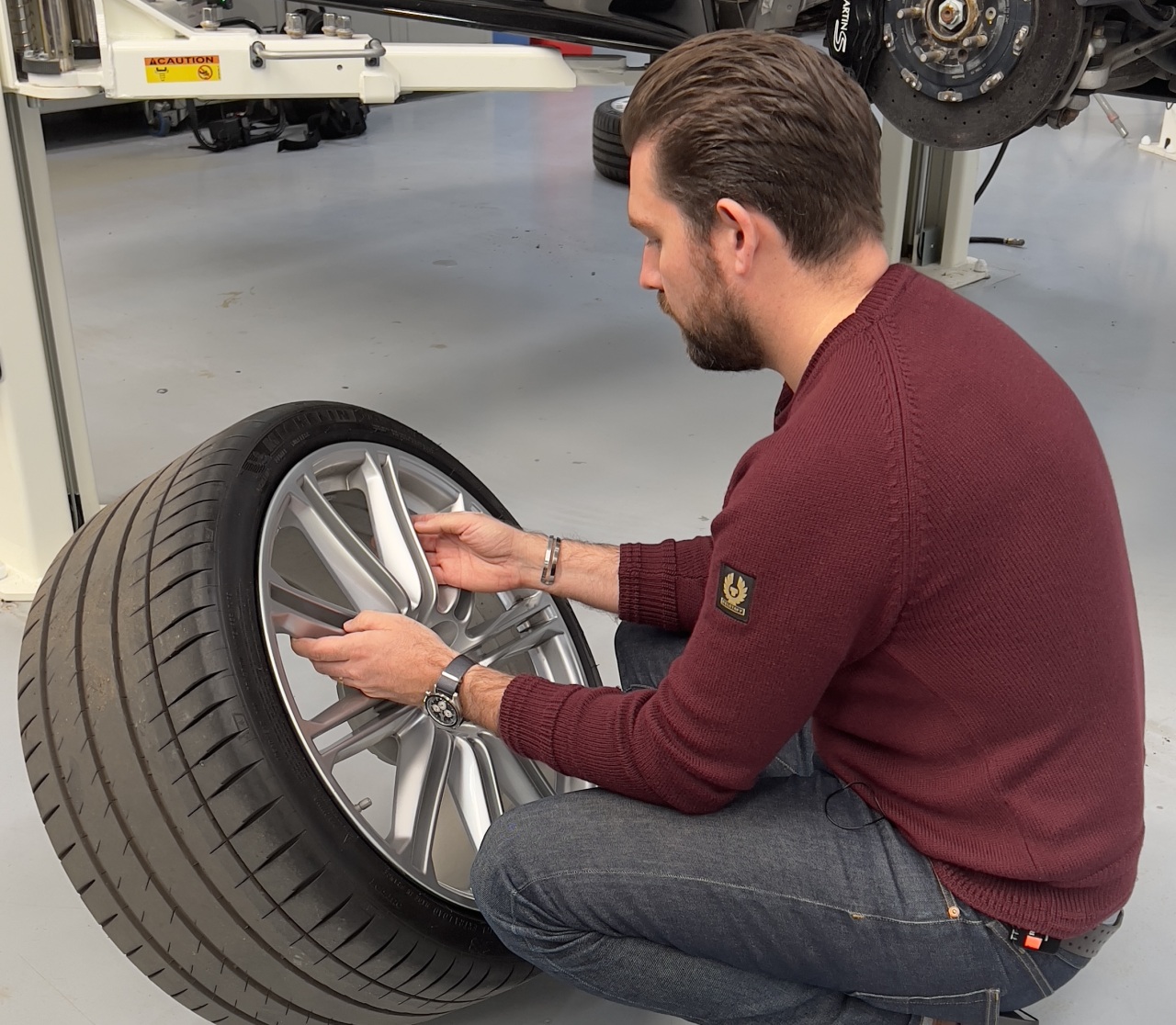 I have heard that an Aston only truly becomes as Aston when the badge is on, and it is the last thing to be applied. Our DBS is about the be ‘un-Astonified’ as Steve takes the badge off – he tells me from looking at it, the badge has been off before, as has the bonnet!

Because they are going to paint the entire car, including the interior, Steve gets stuck into fully dismantling the front doors. They will paint the car as if it were coming brand new from the factory. Steve has to go through the wheel arch to release the gas strut for the front door – you would not think the gas strut would be there. 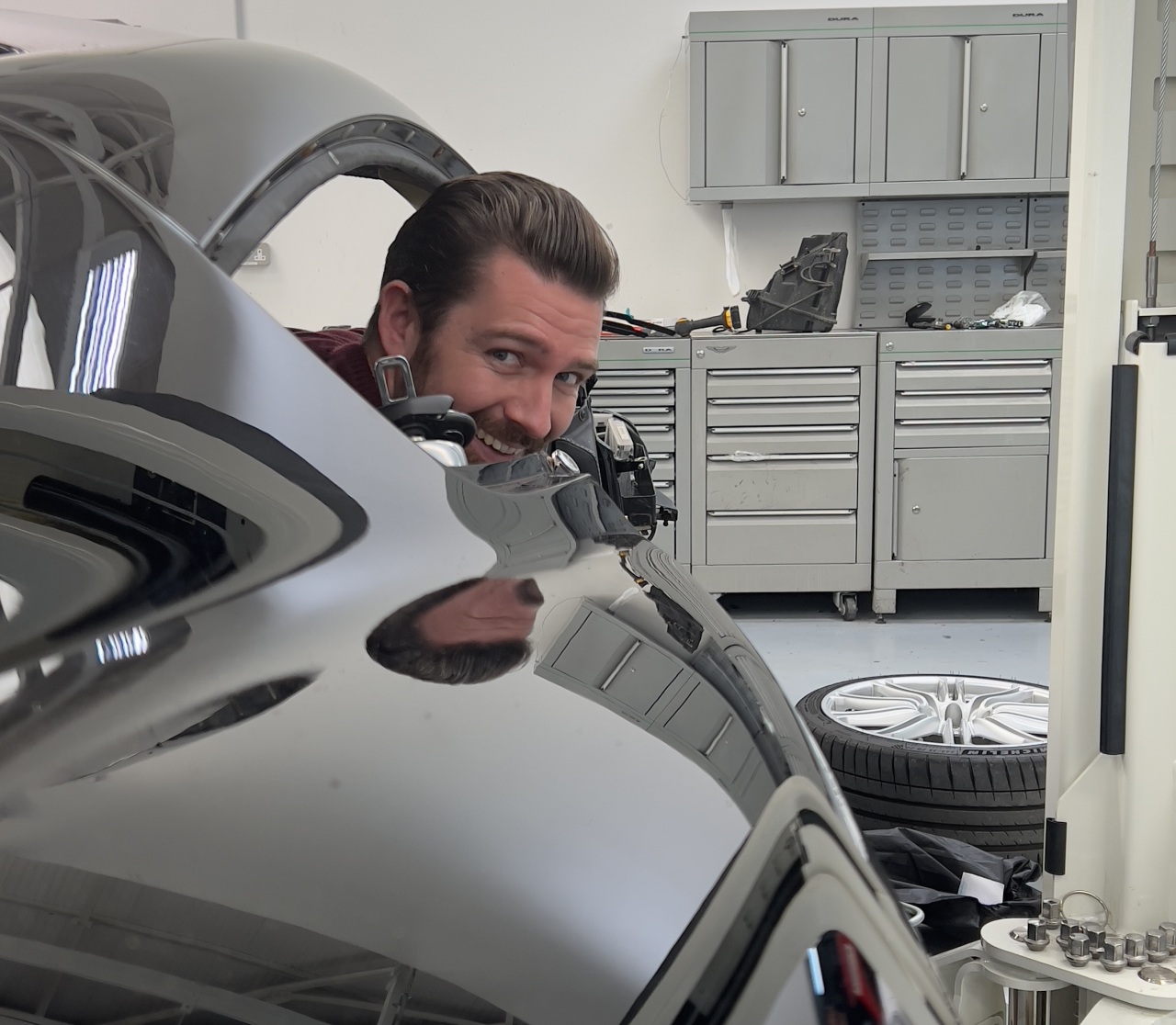 After removing the sound insultation and wheel arch liner, we find a bit of a problem – there is a crack in the side of the bumper which has caused a crack all the way down, through the air box.

Steve removes the front bumper, making lots of snapping noises that you don’t usually associate with your car, and finds the DBS has had lots of not very good repairs in the past. The nuts, meshes and veins have been bonded in. The front grill should clip on, but it has been glued in as well. Instead of coming out as a unit, it is coming out in pieces, leaving the remainders of uprights that had snapped right off – I am amazed it stayed in place! 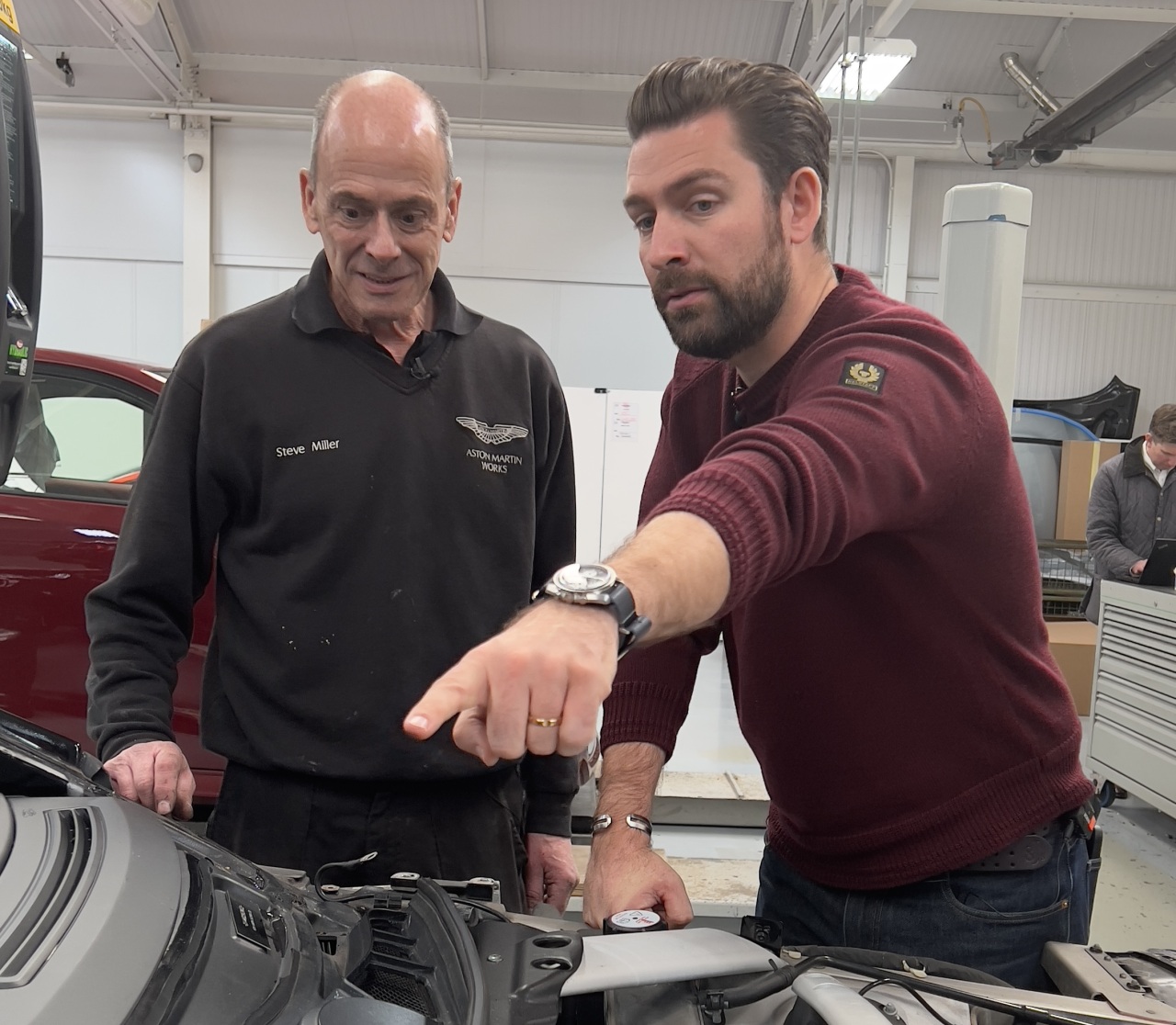 The headlights, which Steve can tell have been overtightened at some point, come out to reveal a lot of dirt which will be very satisfying to clean out. Under the lamps and connectors, I can see cobwebs! The lamps have adjusters which allow you to wind them in and out, but Steve often sees that when the lights are removed for painting, and not re-installed correctly, it causes damage to the paint work and over time it can cause corrosion. The nuances of this information are one of the reasons we are here at Aston Martin Works. It is a real honour to have Steve work on this car. I thought I had gotten a good deal on this car, but it looks like the rear bumper has been off at some point as well, and Steve reckons the car has had a full re-spray. The mesh is loose on the rear bumper, and in place of two clips is another pile of horrible glue.

To remove the rear window, they went round with a wire and cut through the sealer, and I helped Steve carefully lift the glass out. Beneath, more corrosion was revealed. It is going to be the most satisfying process to clean it all out, sand it down, and paint it in our lennox green. 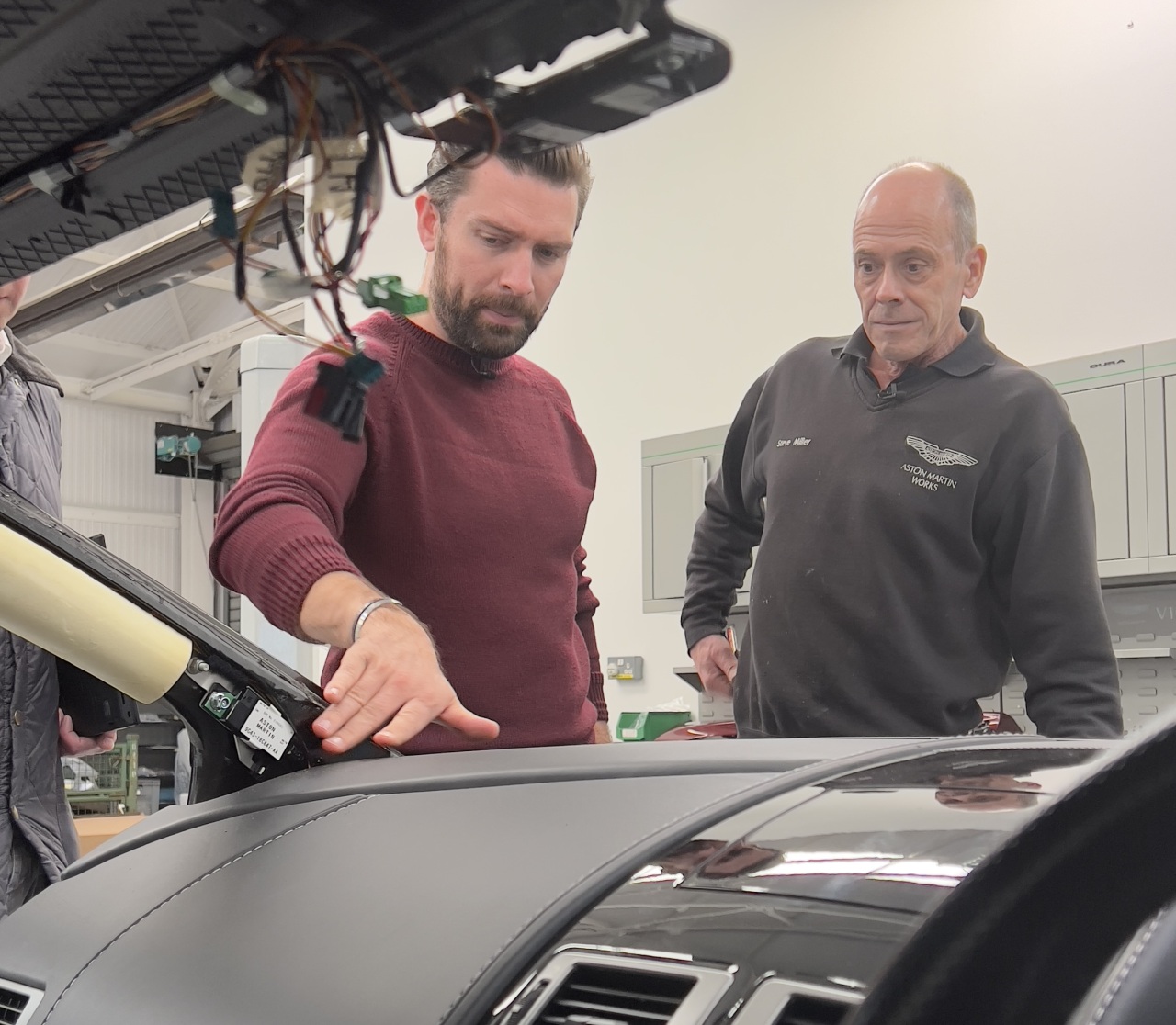 Aston Martin Works feels like the spiritual home, there is a distinct energy to the place. While it has been fun and games with Steve, the real reason we are here is because Steve has been with Aston Martin for 36 years, he knows these cars better than anyone – he is like a forensic scientist with the cars. Steve worked on the original 1986 Lagonda, and there is a real story of continuation to have him now work on our car. It is magic!